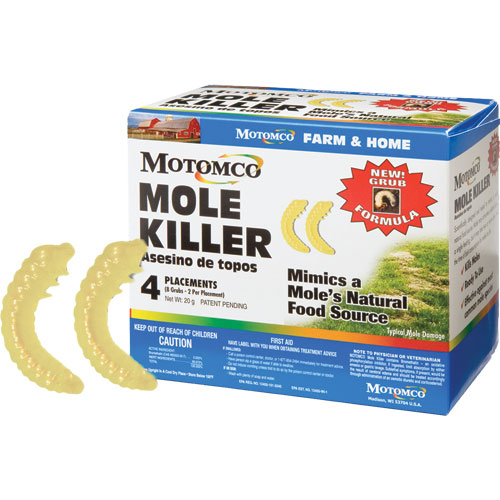 Mimics grubs, another natural food source for moles. EPA-approved for use on lawns and gardens. Ready-to-use; follow directions on box. Four treatments; packaged in two trays with four grubs per tray. 4 ct.

Additional Information
Scientifically proven to kill moles by resembling one of their natural foods, grubs, in size, shape and feel. This breakthrough product was developed and tested on live, captured moles and contains special enhancers to attract moles. It kills in just a single feeding. Moles usually die in their tunnel, often within 12-24 hours of ingesting a single worm. Mole Killer is EPA-approved for use by homeowners on lawns and gardens. 4 ct.
© 2020 Website design and content by AdSerts for Rural King Supply - All rights reserved.